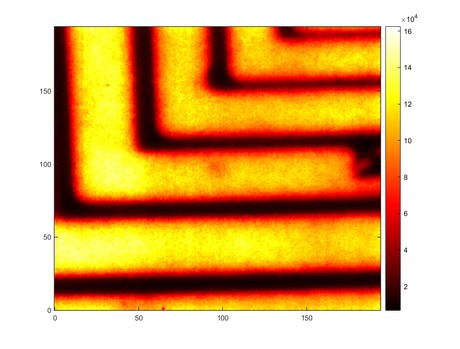 Governments, industry and consumers have faced the issue of counterfeit goods for a long time, with advancements in technology and the growing use of the internet making it easier for counterfeiters to refine their methods and create additional channels for them to promote and sell their goods. Now, Australian researchers may have found a solution to this problem.

“The phosphorous nanocrystals are unique in that they exhibit fluorescence that can be very efficiently switched on or off with a UV light,” said UniSA Research Fellow Dr Nicolas Risen, lead author on a conference paper describing the technique.

In the paper, the fluorescent images are demonstrated to have ultrahigh resolution, close to the theoretical upper limit of about 25,000 dpi or 500 line pairs/mm. The team had been studying these nanocrystal systems for a variety of applications and Dr Riesen said the small size and resolution of the images presents many potential uses.

“Initially we were studying variants of these nanocrystals for optical data storage, as well as X-ray dental imaging at UNSW in Canberra,” Dr Riesen said.

“We then realised that this platform could be used for creating arbitrary fluorescent images on 2D surfaces.”

Dr Riesen said the technique thus presents an opportunity to put a ‘stamp’ on different consumer products, for anti-counterfeiting purposes. The method could, for example, be used to place small images on banknotes or medical packaging that would be extremely difficult to forge and would be readable with a basic microscope and blue light.

In terms of the material costs, Dr Riesen said the required resources come at a small cost. Expensive chemicals are not required to make the nanocrystals; rather, the difficulty comes in their application.

“You would need specialised people and equipment to put those images on bank notes or consumer products, making it very difficult to counterfeit,” he said. “Someone would have to be highly specialised to know how to do this; however, once it’s been set up it’s highly repeatable.”