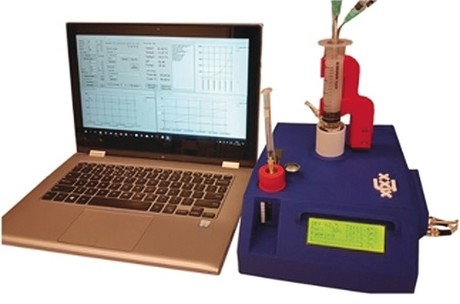 Researchers at the University of Amsterdam have developed a simple benchtop device for measuring the kinetics of gas-producing reactions.

Described in the journal Angewandte Chemie, the device costs less than €250 and weighs only 1.5 kg, yet it provides accurate reaction profiles with over 3000 measurements. It is also programmable for running temperature profiles, providing Arrhenius plots with hundreds of data points from a single experiment and enabling quick and efficient analysis of both kinetics and thermodynamics.

Measuring the kinetics of chemical reactions is common in many laboratories, as it provides insight into systems as they move towards equilibrium. It is also essential for testing hypotheses, understanding reaction mechanisms, and designing and optimising chemical processes. But the task itself is often mundane, time-consuming and labour-intensive — particularly when determining Arrhenius relations, which require multiple sets of measurements.

Now, PhD student Thierry Slot presents a solution in the form of a simple device, based on bubble counting, to replace the century-old experimental set-up of the upside-down burette. Slot built his first working prototype of the device out of frustration, to save time and hassle.

“The upside-down burette is used to quantify the formation of gaseous products by measuring their volume,” Slot explained. “However, identifying small differences in reactivity requires the determination of rather small differences in volume, which always gave me problems. So I came up with the idea of a bubble counter that measures the development and passage of gas bubbles rather than the displacement of water in the upside-down burette. I built the first working prototype over a weekend, using some old parts scavenged from a gas chromatograph, a heating element and the laser from my cat’s toy.”

Slot’s supervisors, Dr Raveendran Shiju and Professor Gadi Rothenberg, immediately recognised the potential of the new method. Together, the group developed the bubble counter into a benchtop device enabling a sensitive and reliable quantification method.

Using a laser beam, the device detects the bubbles that arise as a result of the delicate balance between pressure and surface tension in the detection liquid. The device is able to accurately time these gas bubbles, enabling a precise calculation of the volume of each bubble. This yields detailed and reproducible kinetic profiles with thousands of measurements in a single experiment. The device also includes a digital temperature controller, enabling the analysis of thermodynamic parameters and the precise calculation of Arrhenius relations.

“The ability to measure very large numbers of data points is a game changer because it can give insight to mechanistic features that were previously undetectable,” Prof Rothenberg said. “It’s a little like having the world’s first telescope or microscope — a piece of equipment that enables you to see things beyond the state-of-the-art.”

The researchers considered patenting and commercialising the device, but decided instead to make it publicly available and open access. Meanwhile, Slot has built two more devices for specific applications, which researchers in the group are already using.

“Many labs could benefit from this kind of device, but this doesn’t immediately justify investing time, money and effort in commercialisation,” Prof Rothenberg said.

“In this case, we chose to share the knowledge (including all of the files needed for 3D printing and manufacturing) so people can build such devices in their own labs.”

Image caption: Photo of the bubble-counting device in action. Image courtesy of the study authors under CC BY-NC 4.0