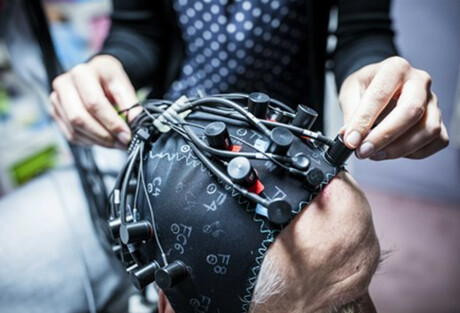 Researchers at Melbourne’s Bionics Institute are developing a groundbreaking new diagnostic test for tinnitus, which could pave the way to new treatments.

Tinnitus — the perception of sounds without an external source — affects one in 10 people globally. 20% of those affected report severe tinnitus — among them is Geelong midwife Deb, who says her condition is “like a gas leak in my head with multiple layers of hissing around the clock, every day”.

There is currently no treatment for tinnitus — only ways to control symptoms, which don’t always work. Furthermore, said Dr Mehrnaz Shoushtarian, the fact that there is currently no objective test to diagnose tinnitus or measure the severity means that doctors are often unable to help those affected.

“Our aim is to provide clinicians with a reliable diagnostic test to assess if a treatment is working, and also give researchers the information about brain activity in tinnitus needed to develop new treatments,” Shoushtarian said.

Shoushtarian and her team have now developed a test that can distinguish between mild and severe tinnitus with 87% accuracy, using light technology to read brain activity that is analysed using artificial intelligence. The test utilises functional near-infrared spectroscopy (fNIRS), a non-invasive brain imaging technique that measures blood oxygen changes in the brain.

The diagnostic test imaging device shines near infrared light over the head using light sources set into a cap. The brain’s blood oxygen levels affect the amount of light reflected back, which is measured by detectors in the cap. The reflex light is analysed using a special algorithm to provide detailed information on brain activity. The device is portable, non-radioactive, quiet and safe to use with implanted devices such as pacemakers.

Bionics Institute CEO Robert Klupacs said the test is an excellent example of bioengineering innovation at its best, stating, “Dr Shoushtarian’s team … has shown that we can diagnose tinnitus with incredible accuracy in a small clinical study. We are now seeking funding to develop a portable version with easy-to-use software that can be trialled for use in clinics in Australia and around the world.”

The new test was the focus of the Bionics Institute’s recent webinar ‘Measuring tinnitus - detecting an invisible condition’.

4DMedical has unveiled its XV Scanner — claimed to be the world's first dedicated lung...