Monash scientists get US patent for malaria diagnostic technique 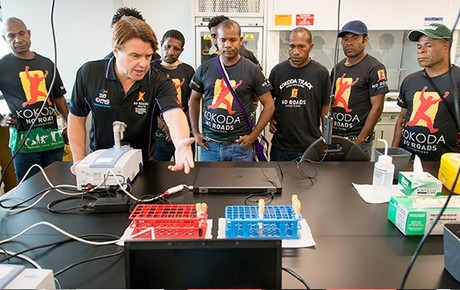 A research collaboration headed by a Monash chemist has received a US patent for a diagnostic technique that could deliver a more accurate test for malaria. The patent is said to be the first of its kind to use spectroscopy to quantify pathogens in blood.

The patent results from work undertaken by a team headed by Associate Professor Bayden Wood, the Director the Monash Centre for Biospectroscopy, and Professor Leann Tilley from the Bio21 Molecular Science and Biotechnology Institute, the University of Melbourne.

News of the patent comes as Melbourne prepares to host the first World Malaria Conference, which runs from 1–5 July.

“We have developed a diagnostic technique that is a game changer and has been recognised as such with the recognition of patent rights,” said Associate Professor Bayden Wood.

“The patent forms the basis to a family of patents covering the diagnosis of pathogens in blood and other body fluids,” he said.

“It is an outstanding achievement because it means that the research can now be commercialised and be delivered to remote communities where malaria is endemic and early diagnosis is critical in preventing the spread of the disease, ultimately saving lives.”

The patent, which had significant contributions from Monash Scientists Dr Aazam Khoshmanesh and Professor Don McNaughton, and Dr Matthew Dixon (Bio21, Melbourne University), has been licensed to Biotech Resources (BTR) — a company on a mission to transform the diagnosis of major diseases to reduce mortality and morbidity globally. BTR will commercialise the product, to be known as ‘Aimalux’.

“The patent covers the extraction of the parasites from the blood sample, spectroscopic analysis of the sample and cloud-based diagnosis based on the infrared lipid signatures from the parasite,” said Associate Professor Wood.

Patent applications are also pending in Australia and nine other countries. The US patent was the first to be granted, and signals a successful prosecution of patents in other jurisdictions.