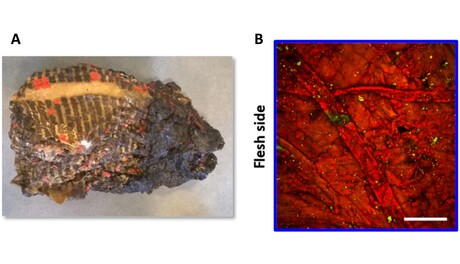 The conservation state of parchments is typically assessed using invasive and sometimes destructive investigation techniques. Scientists from Université Paris-Saclay, the CNRS, École Polytechnique and the French Ministry of Culture have now developed a non-destructive and non-invasive advanced optical imaging technique to quantitatively assess the degradation state of parchments, as described in the journal Science Advances.

In the Middle Ages, parchment was the main writing support prior to the arrival of paper. Parchment is made from animal skin which is treated, scraped and dried under tension. After the manufacturing process, the main remaining constituent is collagen, a fibrillar protein.

Parchments are incredibly sensitive to heat and water, and the combination of the two can lead to an alteration in the multiscale structure of fibrillar collagen. The ultimate stage of collagen degradation is a total loss of fibrillar organisation, ie, the formation of gelatin, which can cause the parchment to become transparent and rigid.

Nonlinear optical (NLO) microscopy is a 3D imaging technique that provides micrometre-scale resolution images. By combining second harmonic generation (SHG) signals, which are sensitive to fibrillar collagen, with an analysis of the polarisation of the state of light, it is possible to measure the degree of alignment in the fibrillar collagen, which is closely related to the state of degradation. This approach was tested on a set of contemporary parchments, which were artificially altered by heat exposure for increasing durations and then validated by comparing them with a reference technique to assess the conservation state.

Nonlinear optical microscopy was then used to analyse historic 13th-century parchment manuscripts belonging to the renowned collection at the Chartres Library. Some of these manuscripts were destroyed or damaged to varying degrees when the city was heavily bombed in 1944 during the Liberation. The parchments were exposed to fire (and subsequently heat) as well as water, which was used by the firefighters to put out the fire. In 2009, some of the damaged documents were restored using humidification in order to flatten the parchments. Using nonlinear optical microscopy, the researchers were able to map the conservation state of several parchment manuscripts and confirm the absence of impact from the restoration process.

The nonlinear optical microscopy technique thus enables new possibilities for the analysis of collagen-based cultural heritage artefacts, such as parchments, leather, or natural history specimens dried or preserved in fluids. It also offers possibilities for use in a wide range of other fields.

Image caption: Investigation of a fragment from a block of agglomerated and strongly degraded parchment leaves from the Chartres Library. (A) Picture of the parchment block (Credit: M Schmeltz, Laboratoire d’Optique et Biosciences). (B) NLO microscopy image on the flesh side (SHG signals in green and 2PEF signals in red). Scale bar, 100 μm.