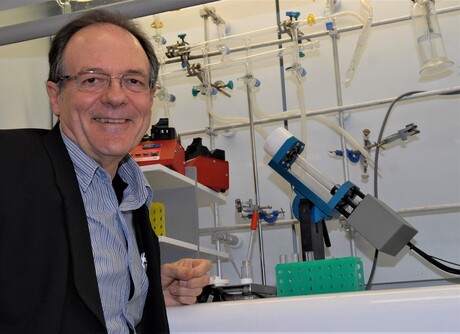 Researchers from Flinders University and the University of Technology Sydney (UTS) have collaborated on the creation of a non-toxic fluorescent dye that detects bacteria harmful to humans. Published in the journal Materials Chemistry Frontiers, the work was reliant on the green chemistry tool known as the Vortex Fluidic Device (VDF), invented at Flinders back in 2015.

The VFD is a chemical processing tool that is capable of instigating chemical reactivity, enabling the controlled processing of materials such as mesoporous silica and effective in protein folding under continuous flow, which is important in the pharmaceutical industry. For several years it has impressed researchers with its adaptability in green chemistry innovations, and now it is being deployed as part of a new application.

Using the VFD has now enabled the preparation of a new generation of aggregation-induced emission dye (AIE) luminogens using graphene oxide (GO). As noted by lead author Dr Javad Tavakoli, based at UTS, GO is well recognised as an effective fluorescence quenching material.

The AIE luminogen in question was first developed in 2015 to enable long-term monitoring of bacterial viability; however, increasing its brightness to increase sensitivity and efficiency remained a difficult challenge. Previous attempts to produce AIE luminogen with high brightness proved very time-consuming, required complex chemistry and involved catalysts that rendering their mass production too expensive.

Increasing the fluorescent property of GO/AIE depends on the concentration of graphene oxide, the rotation speed of the VFD tube and the water fraction in the compound, so preparing GO/AIE under the shear stress induced by the VFD’s high-speed rotating tube resulted in much brighter probes with significantly enhanced fluorescent intensities — 1400% brighter high fluorescent performance than AIE luminogen alone, in fact. Furthermore, the VFD allows swift and efficient processing beyond batch production and the potential for cost-effective commercialisation.