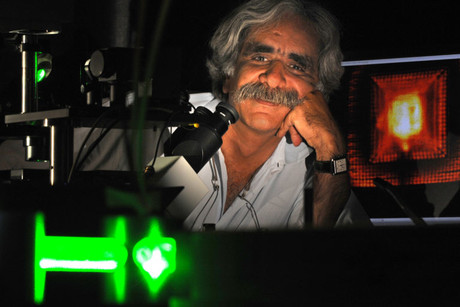 With the aid of a scanning tunnelling microscope, researchers have employed the diatomic compound as a sensor and transducer to probe and image samples, reportedly gaining an unprecedented amount of information about their structures, bonds and electrical fields.

The findings by researchers at the University of California’s (Irvine) Center for Chemistry at the Space-Time Limit (CaSTL) were published in the journal Science Advances.

“We used this technique to map, with sub-molecular spatial resolution, the chemical information inside one molecule,” said co-author V Ara Apkarian, CaSTL director and UCI professor of chemistry.

“To be able to see the inner workings of the basic units of all matter is truly amazing, and it’s one of the main objectives we have pursued at CaSTL for more than a decade.”

To achieve these results, CaSTL scientists attached a single carbon monoxide molecule to the end of a sharp silver needle inside the scope. They illuminated the tip with a laser and tracked the vibrational frequency of the attached CO bond through the so-called Raman effect, which leads to changes in the colour of light scattered from the junction. The tip of the needle in the scanning tunnelling microscope acts like a lightning rod, amplifying the signal by 12 orders of magnitude. By recording small changes in the vibrational frequency of the CO bond as it approached targeted molecules, the researchers were able to map out molecular shapes and characteristics due to variations in electric charges within a molecule.

The probed molecules in the experiments were metalloporphyrins, compounds found in human blood and plant chlorophyll that are exploited extensively in display technologies.

The captured images provided unprecedented detail about the target metalloporphyrin, including its charge, intramolecular polarisation, local photoconductivity, atomically resolved hydrogen bonds and surface electron density waves — the forces that dictate the functionality and structural transformation of molecules. In other words, chemistry.

According to lead author Joonhee Lee, CaSTL research chemist, one of the key results of the experiments was the elucidation of the electrostatic potential surface of the metalloporphyrin molecule — basically, its functional shape, which until recently had been a theoretical construct. He said the ability to determine this will be particularly beneficial in future studies of macromolecules, such as proteins.

The CaSTL project was supported by the National Science Foundation.