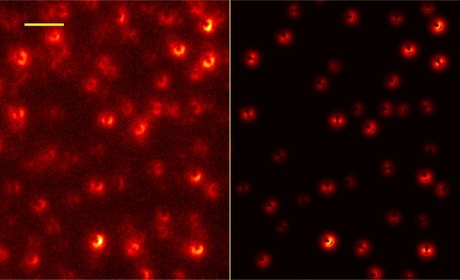 Researchers at the University of Göttingen have developed a new microscopy method whereby the unusual properties of graphene electromagnetically interact with fluorescing molecules. Described in the journal Nature Photonics, the method is said to allow scientists to optically measure extremely small distances, in the order of 1 ångström (one ten-billionth of a metre), with high accuracy and reproducibility.

Led by Professor Enderlein, the researchers used a single sheet of graphene, just one atom thick (0.34 nm), to modulate the emission of light-emitting (fluorescent) molecules when they came close to the graphene sheet. The excellent optical transparency of graphene and its capability to modulate through space the molecules’ emission made it an extremely sensitive tool for measuring the distance of single molecules from the graphene sheet.

The accuracy of this method is so good that even the slightest distance changes of around 1 ångström (around the diameter of an atom) can be resolved. The scientists were able to show this by depositing single molecules above a graphene layer. They could then determine their distance by monitoring and evaluating their light emission.

The graphene-induced modulation of molecular light emission also provided a sensitive and precise ‘ruler’ for determining single molecule positions in space. The researchers used this method to measure the thickness of single-lipid bilayers — the stuff that makes the membranes of all living cells — which are constituted of two layers of fatty acid chain molecules and have a total thickness of only a few nanometres.

“Our method has enormous potential for super-resolution microscopy because it allows us to localise single molecules with nanometre resolution not only laterally (as with earlier methods) but also with similar accuracy along the third direction, which enables true three-dimensional optical imaging on the length scale of macromolecules,” said Arindam Ghosh, first author on the paper.

Corresponding author Professor Jörg Enderlein added, “This will be a powerful tool with numerous applications to resolve distances with sub-nanometre accuracy in individual molecules, molecular complexes or small cellular organelles.”

Left image: Single molecules on the graphene sheet. Such images allow scientists to determine the position and orientation for each molecule. The expected image is shown on the right.