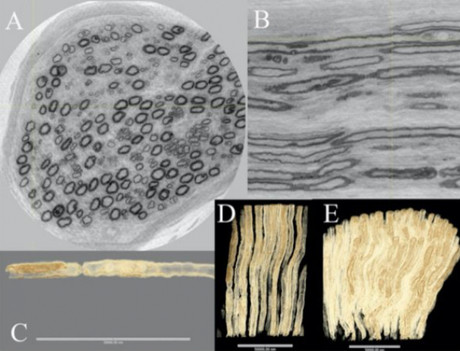 In an international collaboration led by Lund University, researchers have used synchrotron light to study what happens to the nerves in diabetes. Described in the journal Scientific Reports, the technique shows the 3D structure of nerve fibres in very high resolution.

The nerves that the researchers studied came from nerve biopsies from three individuals: one healthy person, a patient with type 1 diabetes and another one with type 2 diabetes. All had undergone surgery for carpal tunnel syndrome — a common condition, especially among those with diabetes.

By using synchrotron light, the researchers were able to show in detail what happens when nerve fibres in peripheral nerves are damaged. Such changes can occur in neuropathy, a nerve disease that affects patients with diabetes, but also in connection with surgical procedures.

“In these cases, we know that nerve fibres atrophy,” said Lund Professor Lars Dahlin. “It appears that as they then grow, they take new paths — they are slightly more ‘confused’. You could say they have poor GPS. But exactly what this looks like has not been shown before.”

If you compare synchrotron light with the X-ray equipment used in a hospital, the synchrotron source is about a hundred billion times more intense. It is like a microscope, but with X-ray light that has a much shorter wavelength than regular light. This allows you to study soft tissue at the cellular level without making incisions — referred to as virtual histology.

Furthermore, previous techniques have only ever been able to produce two-dimensional images. Martin Bech, a medical radiation physicist at Lund University, said, “This is a whole new way of studying nerves compared with histology, where you look at the tissue section by section in two dimensions. Here we get an image that allows us to rotate the nerve fibre and perceive details in a completely different way.”

The researchers were thus able to map in detail what it looks like when, together with healthy nerve fibres, thin nerve fibres grow back and create something called regenerative clusters. They also found that when a nerve fibre is affected by diabetes neuropathy, it grows in a specific way.

“The nerves grow back again in a spiral,” Prof Dahlin said. “Being able to see this in 3D gives us a unique opportunity to understand how nerve fibres grow, which is important both in diabetes neuropathy and in other direct damage to the nerves.”

The researchers are now working on a larger follow-up study in which they hope to be able to further identify more nerve fibres. The study will investigate how the thickness of the nerve fibres varies, as well as the extent to which regenerative clusters occur.

“This can deepen our knowledge of biological changes in diabetes, and in the long term alter treatment principles,” Prof Dahlin said.

“It means that we can better understand how diabetes affects the nerves in the arms and legs.”

Image A is a cross-section of nerves, showing both healthy and thin nerves. Image B is an incision along the nerves. Images C, D and E are of healthy nerve fibres. All images are taken with synchrotron light. Images credit: Martin Bech.

The technique presents an opportunity to put a 'stamp' on different consumer products,...