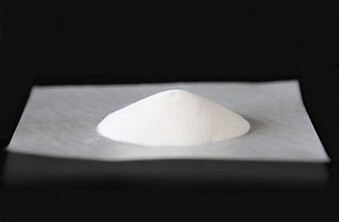 The researchers discovered that alumina can be repeatedly reused for this reaction if it is washed with water and dried between usages, reducing both the need for more alumina and the amount of waste produced. They hope that this new method of chemical synthesis, described in the journal ChemistryOpen, will contribute towards realising a carbon neutral society.

Alumina (Al2O3) is an aluminium oxide that can be used as a catalyst in the field of organic synthetic chemistry, mainly for reactions that require harsh conditions (such as high temperature or high pressure). It is also used to adsorb impurities in the organic synthesis field and as a stationary phase substance in chromatography, but issues such as its high cost as a raw material and the large amount of non-burnable waste it generates means that there is a trend towards replacing it with substitutes. Now, Professor Akihiko Tsuda and his team at Inner Mongolia Medical University have discovered a way of synthesising diphenylmethanol derivatives by utilising alumina from China — the world’s number one producer of alumina — as both a catalyst and adsorbent.

Furthermore, the group found that a highly pure product could be obtained even if it was adsorbed by alumina that had previously been used as a catalyst or was an impure by-product. Using the method, it is possible to selectively synthesise three different products.

For the synthesis experiments in the laboratory, the amount of alumina used was in the region of a few grams to tens of grams. Commercial alumina is comparatively expensive, which would make it difficult to implement reactions like this on an industrial scale. With this in mind, the researchers tried reusing the alumina after rinsing it with water and allowing it to dry, and discovered that it retained its catalytic and adsorbent properties. This recycling process can be performed repeatedly, which greatly reduces the cost of materials as well as the amount of waste.

The researchers say they have developed a safe, high-yield reaction that only takes a number of hours to complete, while the novel catalytic, adsorbent and recyclable properties of alumina have potential applications for the organic synthesis of compounds other than diphenylmethanol derivatives. The goal is to expand the range of applications to develop a more general synthesis method that can be used to produce a variety of useful chemicals. It is hoped that continued development of this method will result in highly practical large-scale implementation.