Retrovirus is causing cancer in koalas 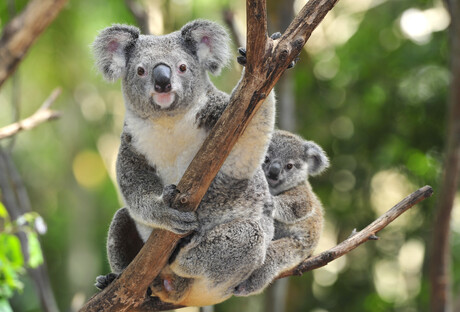 Koalas are facing multiple issues which threaten their survival, including deadly chlamydial infections and extremely high frequency of cancer. An international team of scientists, led by the Leibniz Institute for Zoo and Wildlife Research (Leibniz-IZW), has now demonstrated that a retrovirus invading the koala germline explains the high frequency of koala cancer, as reported in the journal Nature Communications.

The koala retrovirus (KoRV) is a virus which, like other retroviruses such as HIV, inserts itself into the DNA of an infected cell. At some point in the past 50,000 years, KoRV has infected the egg or sperm cells of koalas, leading to offspring that carry the retrovirus in every cell in their body. The entire koala population of Queensland and NSW now carries copies of KoRV in its genome.

All animals, including humans, have gone through similar ‘germline’ infections by retroviruses at some point in their evolutionary history and contain many ancient retroviruses in their genomes. These retroviruses have, over millions of years, mutated into degraded, inactive forms that are no longer harmful to the host. Since in most animal species this process occurred millions of years ago, the immediate health effects on the host at that time are unknown, but it has been suspected for some time that the invasion of a genome by a retrovirus may have considerable detrimental health effects. The koala is at a very early stage of this process when the retrovirus is still active and these health effects can be studied.

Since retroviruses can cause cancer, it was thought that there is a link between KoRV and the high frequency of lymphoma, leukaemia and other cancers in koalas from northern Australia. To investigate this link, scientists at Leibniz-IZW sequenced DNA from wild koalas suffering from cancer. This allowed them to accurately detect the number of copies of KoRV in the koala genomes and identify the precise locations where the retrovirus had inserted its DNA. By comparing this information between healthy and tumour tissues in single koalas, and by comparing insertion sites between koala individuals, they found multiple links between KoRV and genes known to be involved in the kind of cancers to which koalas are prone.

“Each koala carries around 80–100 inherited copies of KoRV in its genome,” said Prof Alex Greenwood, Head of Department of Wildlife Diseases at the Leibniz-IZW. “The genomic locations of most of these are not shared between koalas, indicating a rapid expansion and accumulation of KoRV copies in the population. Each time a retrovirus copies and reinserts itself into the genome, it causes a mutation, potentially disrupting gene expression, which could be detrimental to the host.” This means that by frequently copying itself to new locations in the genome, KoRV is currently conferring a high mutational load on the koala population.

Tumour tissues contain many new copies of KoRV, indicating that KoRV is more active in tumour cells. These copies generally were located close to genes associated with cancer. New KoRV insertions in tumour tissues affected the expression of genes in their vicinity. Such changes in gene expression associated with cancer can cause increased cell growth and proliferation, which leads to tumours.

Although other factors may also contribute to cancer in koalas, the mutational burden from KoRV likely increases the frequency of cells becoming cancerous and may shorten the time for cancer to develop. In one koala, a copy of KoRV was found that had incorporated an entire cancer-related gene from the koala genome into its DNA sequence. This greatly increased expression of this gene and most likely caused cancer in this particular koala. If this mutated virus is transmissible, it would be of grave concern for koala conservation efforts.

Comparing the genomic location of KoRVs between koalas also suggests that KoRV may predispose related koalas to particular tumours, with koalas sharing KoRV insertions in specific cancer-related genes suffering from similar types of cancer which they can pass on to their offspring. Across all koalas studied, there were ‘hot spots’ in the genome where KoRV frequently inserts itself. These hot spots were also located in proximity to genes associated with cancer.

“In summary then, we find multiple links at the genomic level between cancer-related genes and KoRV, revealing ways in which KoRV underlies the high frequency of cancer in koalas,” said Gayle McEwen, a scientist at Leibniz-IZW.

The results highlight the detrimental health consequences that wildlife species can suffer following germline infection by retroviruses. The good news is that the scientists have previously shown that old retroviruses present in the koala genome aid the rapid degradation of KoRV. The koala therefore finds itself in a race to survive the effects of KoRV long enough for the virus to be degraded — and considering the many threats that koalas face, it is a race they will need to win.