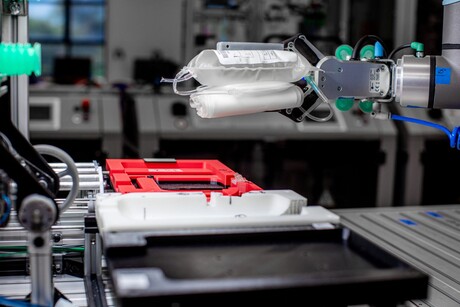 Researchers at Swinburne University of Technology have found a way to automate the processing of blood donation packs — a concept that was believed to be impossible — with a little help in the form of funding from the Innovative Manufacturing CRC (IMCRC).

Blood processing is a largely manual task. At a processing centre, whole blood donations must be separated into their cellular components via centrifugation. To do this, the blood pack must be folded in a particular way to ensure during the process there is no bacterial contamination (which, in turn, increases shelf life).

Staff are highly trained to carry out this operation, but there are still risks and instances of human error. Damaged or torn packs not only lead to the loss of a precious donation, but also disrupt production, and they expose staff to potentially hazardous biological materials. Even subtle non-conformities can occur and build over time, leading to quality deviations. Furthermore, such repetitive motions — sometimes hundreds a day — can cause ergonomic strain and injury for staff.

Swinburne researchers have now worked to automate the folding and centrifuge-tube loading process using collaborative robotics, vision systems, jigs and actuators. It’s not an easy task to automate — the blood packs are soft and ‘deformable’ objects, which can lead to a significant variation in shape and geometry. This makes it difficult for a robot or computer that is not suited to the myriad of geometries.

In fact, the automation of the manipulation of soft deformable objects is a hot topic in robotics research. That’s why IMCRC was so keen to fund the project — as well as the practical, impactful social good that success could have in the blood donation space, it could be a step forward for automation and innovative manufacturing.

Within three months, the Swinburne team knew they could not only automate the process, but also add to the project scope. They built a proof-of-concept robot arm that shows automation can be used to fold whole blood collection packs — and also built in image recognition for quality inspection, data recording for traceability, anomaly detection in manually placed stickers/labels and more.

Project lead Dr Shanti Krishnan, the Deputy Director of Swinburne’s Factory of the Future, said, “I was very excited at the challenge of finding an automated innovative solution to the problem of a repetitive manual process in the medical industry, using collaborative robots and machine vision systems.

“I am proud to say that the dedicated team effort of engineering excellence and applied research at Swinburne’s Factory of the Future has resulted in the successful completion of the proof-of-concept design.”

The project has also been extended with a new aim: to make the robot faster. Since it’s currently much slower than a human, speed will be a crucial step to integrating this safer, more accurate process.

“The findings could also be translated to other, similar processes involving soft deformable objects, with an impact on food, health, agriculture and other industries — basically anything dealing with packaging,” Krishnan concluded.

Image caption: The robot arm holds the folded blood pack, which is filled with water, to demonstrate that the process can be automated.

LSBio offers a broad selection of over 13,000 cDNAs, each available in either a cloning vector or...

Lonza has announced an expansion to its PyroTec PRO automated robotic system for endotoxin...