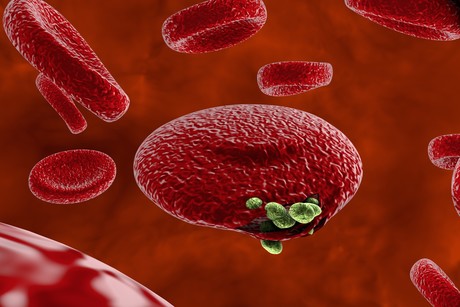 Malaria parasites can sense a molecule produced by approaching immune cells and then use it to protect themselves from destruction, according to a new study led by the Agency for Science, Technology and Research’s (A*STAR) Singapore Immunology Network (SIgN) and published in the journal eLife.

As malaria parasites mature within blood cells, they become more recognisable by the immune system as intruders. But the parasites have evolved ways to avoid the immune response, such as by producing sticky molecules on infected red blood cells that allow them to bury themselves in tiny blood vessels.

“One way that malaria-infected red blood cells evade the immune system is to attach directly to non-infected red blood cells to form a flower-shaped structure called a rosette,” said lead author and SIgN fellow Wenn-Chyau Lee. “The rosette phenomenon has been shown in all human malaria parasites and might be linked to disease severity, but its exact function in the progression of malaria is unclear.”

Recent studies suggest the rosette might work as a mask for the malaria-infected red blood cell and prevent its clearance by the immune system. Lee and the team set out to test this theory.

Next, they attempted to work out how the immune cells were stimulating rosette formation by extracting different components of the blood and analysing which ones were required for rosette formation. Using a step-by-step approach, they identified a substance called human insulin growth factor binding protein 7 (IGFBP7) that was needed for rosettes to form. In fact, when they added IGFBP7 to two different malaria parasite species in the absence of any immune cells, this still stimulated the formation of rosettes.

The team then investigated how the malaria parasites were sensing the IGFBP7 molecule and speculated that it must involve parasite-derived molecules being displayed on the surface of infected red blood cells. Through a process of elimination that involved genetically altering the red blood cells and filtering out components of the blood, they identified a number of molecules that were required for rosette formation. Some of these are thought to be produced by immune cells in response to malaria infection, such as IGFBP7, whereas others are present in the blood with or without the presence of the parasite.

Finally, the scientists investigated whether rosette formation triggered by IGFBP7 could prevent the malaria-infected cells being swallowed up and destroyed by the immune cells — a process called phagocytosis. As anticipated, in the presence of IGFBP7 the rosette formation increased, but the number of infected red blood cells that were engulfed by immune cells was reduced.

“Our work describes a previously unknown defence mechanism in malaria that is mediated by a molecule produced by the very immune cells it is trying to evade,” concluded senior author Laurent Renia, Executive Director of SIgN. “By using this molecule, along with other substances in the blood, malaria-infected blood cells recruit non-infected blood cells to form a rosette shield, allowing them to escape destruction by the immune system. Our results suggest that targeting this mechanism could be an effective approach in the development of novel antimalarial drugs.”