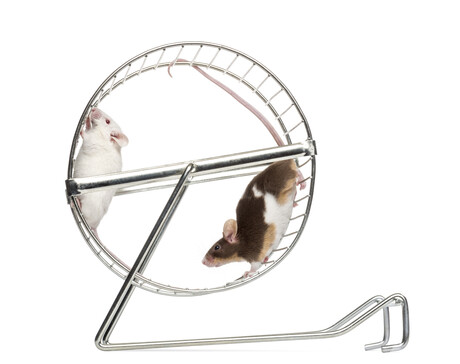 The benefits of exercise are well established, including increased strength of bones and muscles, improved mobility and endurance, and lower risk of heart disease, diabetes and high blood pressure. Now researchers from the University of Kentucky, the University of Arkansas and the University of Texas Medical Branch have found that exercise may quite literally be helping us to stay young — on an epigenetic level, that is.

As part of a study published in the journal Aging Cell, lab mice nearing the end of their natural lifespan, at 22 months old, were allowed access to a weighted exercise wheel, which would give them the opportunity to build muscle. When the mice were studied after two months of progressive weighted wheel running, it was determined that they were the epigenetic age of mice eight weeks younger than sedentary mice of the same age — 24 months.

Kevin Murach, an assistant professor at the University of Arkansas, was one of three co-first authors on the study. He noted that while the specific strain of mice and their housing conditions can impact lifespans, “historically, they start dropping off after 24 months at a significant rate”. When your lifespan is measured in months, an extra eight weeks — roughly 10% of that lifespan — is therefore a noteworthy gain.

The science behind this hinges largely on a biological process known as DNA methylation — a process in which clusters of atoms, called methyl groups, attach themselves to the outside of genes like minuscule barnacles, making the genes more or less likely to turn on and produce particular proteins. As the body ages, there tends to be increased DNA methylation, or even hypermethylation, at promoter sites on genes in muscle.

“DNA methylation changes in a lifespan tend to happen in a somewhat systematic fashion, to the point you can look at someone’s DNA from a given tissue sample and with a fair degree of accuracy predict their chronological age,” Murach explained. Due to this, researchers can use one of a number of ‘methylation clocks’ to determine the age of a DNA sample.

“If so, what are the consequences of this?” he asked. “Do changes on these very specific methylation sites have an actual phenotype that emerges from that? Is it what’s causing ageing or is it just associated with it? Is it just something that happens in concert with a variety of other things that are happening during the ageing process? So that’s what we don’t know.”