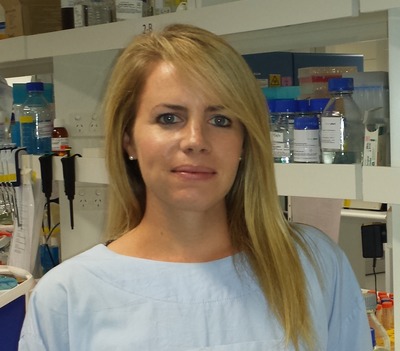 An early-career researcher with the Cancer and Stem Cell Biology Group at Children’s Cancer Institute Australia (CCIA), Lynch will look at whether targeting long non-coding RNAs can provide a potential new way of treating acute lymphoblastic leukaemia (ALL).

“I recently recruited a research assistant,” said Lynch, who is in the second year of her postdoc at CCIA. “So the work has just started. We plan to look at a particularly aggressive subtype of ALL, called MLL-rearranged ALL.”

ALL is most common in children between 2 and 5 years of age.

MLL-rearranged ALL is the most aggressive subtype of childhood leukaemia and has a very poor prognosis. It is characterised by a high incidence of chromosomal translocations or rearrangements in the MLL gene. These chromosomal rearrangements are an important predictor of adverse outcome.

“We aim to begin figuring out how this chromosomal rearrangement contributes to the aggressiveness of MLL-rearranged leukaemia,” explained Lynch. “Several long non-coding RNAs have been characterised and linked to the MLL-rearrangement and we plan to look at how they contribute to the disease and to maintenance of the disease.”

Not a lot is known about the function of long non-coding RNAs, but they have been linked to blood development and cancer.

“We have a publication in the pipeline on a gene that we propose plays a critical role in regulating stem cell behaviour in AML and we have evidence to suggest that this gene might be regulated by a long non-coding RNA,” Lynch said.

“Understanding the mechanisms of action of these molecules and how they contribute to cancer will facilitate the development of more targeted therapies.”

Dr Denise Yu, a research officer with the Experimental Therapeutics Program at CCIA, also received a $100,000 award for her research to identify metabolic pathways in cancer cells that may be new targets for treating neuroblastoma - the most common solid cancer found in infants.

The Balnaves Foundation established the Balnaves Foundation Young Researcher’s Fund in 2008 to support the development of original ideas in childhood cancer research. Through the foundation, renowned Australian philanthropist Neil Balnaves AO invests more than $2.5 million each year to support education, medicine and the arts with a focus on young people, the disadvantaged and Indigenous communities.

A large amount of enterobacteria in the gut microbiota was related to long-term mortality risk in...

Technology playing a critical role in worker safety in the warehouse

New law of physics helps understand the friction of touch

Kerry plans to establish a food innovation hub in Qld