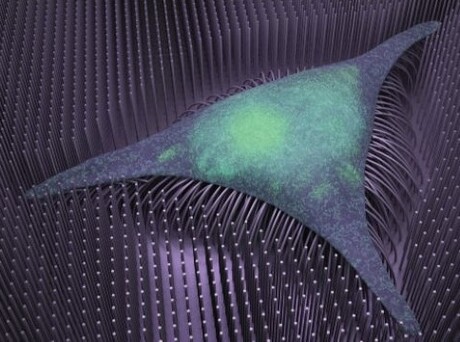 A nanotechnology platform developed at the King Abdullah University of Science and Technology (KAUST) has been found to accelerate the transition of stem cells into bone, potentially paving the way for more efficient treatment of degenerative bone diseases. The breakthrough has been described in the Journal of Nanobiotechnology.

The system takes advantage of tiny iron wires that bend in response to magnetic fields. Bone-forming stem cells grown on a mesh of these nanowires get a kind of physical workout on the moving substrate. They then transform into mature bone much faster than is typical of other culturing conditions, with a differentiation protocol that lasts just a few days instead of a few weeks.

“This is a remarkable finding,” said KAUST bioscientist Jasmeen Merzaban, who co-led the study together with sensor scientist Jürgen Kosel.

The researchers evaluated the bone-producing potential of their nanowire scaffold, both with and without magnetic signals. They patterned the tiny wires — each about the size of the tail-like appendage found on some bacteria — in an evenly spaced grid and then layered bone marrow-derived human mesenchymal stem cells (MSCs) on top.

Adding a low-frequency magnetic field, the researchers found, dramatically accelerated the process of bone development. Genetic markers of bone development could be detected within two days of incubation under mechanical stimulation, while genes linked to stemness and self-renewal quickly became inactive. Under a microscope, the researchers could also see the cells remodelling themselves to become more bone-like at an accelerated pace.

The team next plans to test the system in mouse models of degenerative bone disease, with the expectation that stem cell-seeded nanowire scaffolds can be safely implanted at sites of injury and promote tissue repair. An externally applied magnetic field would be used to speed the healing process.

Study author Jose Efrain Perez, a former PhD student in Kosel’s lab, also sees potential applications in other disease settings, stating, “Varying the matrix stiffness by increasing or decreasing nanowire length and diameter could promote differential responses with MSCs.” The researchers could use other types of stem cells to, for example, promote neuronal growth and brain repair after a stroke.

“We could further customise the nanowire scaffold itself or the base material — for instance, by using different metals to exploit their magnetic responses or coating the nanowires with biomolecules for potential delivery upon cellular contact,” Perez concluded.