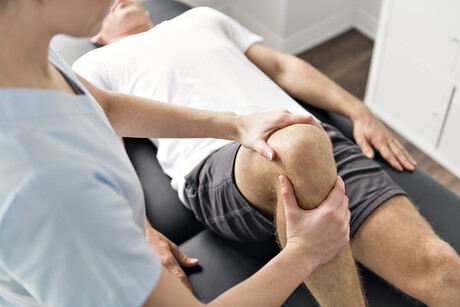 By softening a cell’s nucleus so that it can squeeze its way through dense connective tissues, researchers from the University of Pennsylvania believe they’ve demonstrated a new way to help the body efficiently repair injuries. Their work has been published in the journal Science Advances.

After an injury, the body requires cells to move into the afflicted area and deposit new tissues so that the tissue can be repaired, like a truck delivering cement to a construction site. Allowing cells to move more freely into these areas could make healing quicker and/or more efficient.

The research team believed that stiff nuclei were the limiting fact here, especially when it came to dense tissue such as the meniscus in the human knee. Moving through this type of tissue could rupture or otherwise damage a repair cell’s nucleus as it tried to squeeze through the tight spaces between cells. As such, damage to tissue like the meniscus could heal poorly, if at all, and result in frequent re-injury.

To remedy this, the team applied an inhibitor drug to cells called trichostatin A (TCA), which makes the proteins within their nuclei soften up, allowing for the nucleus as a whole to become more malleable. In the truck analogy, this would be like switching from a rigid truck trailer to one with a canvas cover so that it could access a job site at the end of a road with low-hanging trees. The cover could bend as it made its way through the branches but not get hung up or damaged like a boxy, metal trailer would.

The researchers observed that isolated meniscus cells that had been treated with TCA were able to move through areas that were once thought to be impassible to reach defects in tissue. This is important because some of the repair methods used for injuries involve fibrous scaffolding, which can also be dense and impenetrable. These areas, too, could be infiltrated with the repair cells whose nuclei were softened, the study showed.

“We studied how meniscus cell nuclei can be softened to promote their migration through meniscus tissues,” said Assistant Professor Su Chin Heo, first author on the study. “We have also shown similar enhancement of cell migration in other types of connective tissues, such as tendons or the cartilage covering the ends of bones.”

Moving forward, the researchers are preparing to conduct trials of this technique in meniscus tears in large animals. There is also a possibility that this work has applicability beyond just musculoskeletal injuries, with corresponding author Professor Robert L Mauck claiming that “this finding may pave the way for new therapeutics to improve endogenous repair of a number of dense connective tissues that have poor natural healing capacity and are prone to failure”.

“This isn’t something we’ve tested yet, but this approach could potentially be used to enhance the wound healing process of other types of tissues, such as in the skin,” Prof Mauck added.