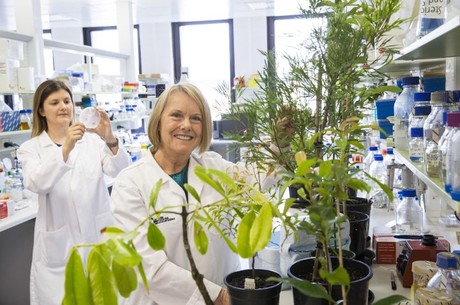 Biotechnology company Hexima, based at the La Trobe Institute for Molecular Science, has announced promising results for its plant defensin peptide, HXP124, in fungal nail infections.

Hexima’s antifungal plant defensin platform has developed from research started by Professor Marilyn Anderson in the late 1990s, when she was searching for molecules that protect flowers from fungal disease. Since then, Prof Anderson — now Hexima’s Chief Science Officer — and her team have identified hundreds of plant-derived antifungal molecules that are effective against a wide range of fungal diseases.

“These molecules are exciting because they kill fungus via a novel mechanism and are active against fungal pathogens that are resistant to current drugs,” Prof Anderson said.

“The HXP124 peptide was first isolated from a shrub called Bitterbush, which grows in warm climates.”

HXP124 rapidly kills a broad range of fungal pathogens, including those that cause fungal nail infections (onychomycosis). As noted by Hexima CEO Dr Nicole van der Weerden, onychomycosis affects around 12% of the global population — from runners and surfers to the elderly and diabetics.

“Unfortunately, many of these are not treated because current available drugs work poorly and are expensive.”

The first human trial of HXP124, a dose-escalation study in which the peptide was applied topically to patients with old to moderate onychomycosis, found the substance to be both safe and effective.

“We have shown that HXP124 can substantially reduce the area of infection and can do so up to four times as fast as other available treatments,” Dr van der Weerden said. “Our treatment penetrates the nail and kills the fungus that causes the infection.

“Because this is the first time this drug has been tested in humans, the data are necessarily from a relatively small number of patients. However, the results are still very encouraging and demonstrate the potential of HXP124 to be a best-in-class topical therapy.”

The second stage of the trial, testing the drug in a larger cohort of patients, is currently underway, with results expected early in 2019. If the results obtained in Part 1 are replicated in the larger patient population in Part 2, Hexima will proceed with a capital raising to fund the next phase of clinical development required to obtain marketing approval in key jurisdictions, including the US and Europe.