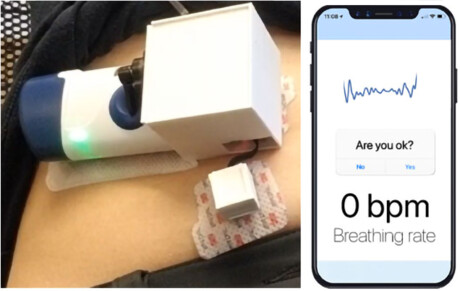 Researchers at the University of Washington (UW) have developed a wearable device to detect and reverse an opioid overdose. The device, worn on the stomach like an insulin pump, senses when a person stops breathing and moving, and injects naloxone — a lifesaving antidote that can restore respiration.

In a multiyear collaboration, UW investigators worked on the prototype with West Pharmaceutical Services, which developed a wearable subcutaneous injector that safely administers medications. The team combined this injector system with sensors and developed an algorithm to detect the life-threatening pattern of respiration that occurs when people experience opioid toxicity.

The pilot device includes a pair of accelerometers that measure respiration and an onboard processor that detects the halt of motion associated with breathing. The wearable system, which has received regulatory approval in the United States, activates the injector in the presence of prolonged apnoeic events (ie, suspension of respiration). The device also can transmit data about breathing rates and apnoeic motion to a nearby smartphone via Bluetooth.

To test the device, a clinical study was conducted with 25 volunteers in a supervised injection facility and a parallel clinical trial was conducted in a hospital environment among 20 volunteers who manifested signs of apnoea by holding their breath. The injection facility deployment was crucial, the researchers said, to help develop algorithms involving real-world, opioid-induced breathing changes. The results were published in the journal Scientific Reports.

At the injection facility, the sensors were able to accurately track respiration rates among people with opioid-use disorder. Further, the device was able to detect non-medical, opioid-induced apnoea, which commonly precedes a potentially fatal overdose. The testing measured breathing patterns only to develop the respiratory algorithm and did not involve injection of naloxone, which was administered only in the second study.

In the second study, healthy participants simulated overdose events in a hospital setting by breathing normally, then performing a breath hold for 15 seconds to mimic an apnoeic event. When the wearable system detected that the subject had not moved for at least 15 seconds, it activated and injected naloxone into the participant. Following device actuation, blood draws taken from study participants confirmed that the system could deliver the antidote into the circulatory system, showing its potential to reverse opioid overdoses.

The researchers said further studies are needed to assess the comfort and discreteness of the device over longer time periods, particularly in unsupervised settings. Additional study of the device is needed to evaluate naloxone injection in people who use opioids for non-medical purposes.

Image courtesy of Chan et al under CC BY 4.0

Subject to final recommendations from ATAGI, the Australian Government will start rolling out the...

A common medication used to treat reflux, heart burn and ulcers could be lessening the...