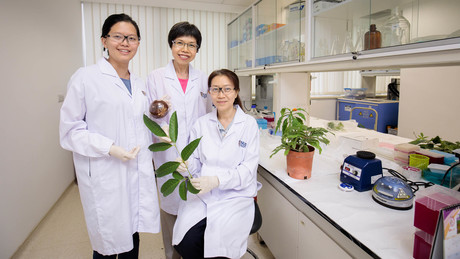 Researchers from the National University of Singapore (NUS) have discovered that the leaves of three Southeast Asian plants are effective in stopping the growth of seven types of cancer. Anticancer properties were also demonstrated in three other medicinal plants, with the results published in the Journal of Ethnopharmacology.

Between 2010 and 2013, Dr Siew Yin Yin (working under the supervision of Associate Professor Koh Hwee Ling) documented the different types of medicinal plants that grow in Singapore and the region. Among the medicinal plants documented, some were reported to be used for the treatment of cancer.

The researchers reviewed the pharmacological properties of the tropical plants that were reported to be used for cancer, and they selected seven promising plant species for further investigation. Experiments involved preparing extracts of fresh, healthy and mature leaves of the seven plants, and testing the extracts with the cell lines of seven different types of cancer — breast, cervical, colon, leukaemia, liver, ovarian and uterine. The team opted to examine leaves as they can regrow without harming the plants.

Among the seven plants, the extracts of the leaves of the Bandicoot Berry (Leea indica), South African Leaf (Vernonia amygdalina) and Simpleleaf Chastetree (Vitex trifolia) were found to be promising against the seven types of cancer. The leaf extracts of the Seven Star Needle (Pereskia bleo) performed well against cervical, colon, liver, ovarian and uterine cancer cells. The leaf extracts of two other plants — Fool’s Curry Leaf (Clausena lansium) and Black Face General (Strobilanthes crispus) — demonstrated efficacy against some cancer cell lines, too.

The Sabah Snake Grass (Clinacanthus nutans) was meanwhile found to have weak effects or no effect against almost all the cell lines tested, which Assoc Prof Koh says was an unexpected result. “In our earlier study, this plant was frequently reported to be used by cancer patients in the region. One possibility could be that it may be helping cancer patients in other ways, rather than killing the cancer cells directly,” she said.

While the results of this study provided the scientific basis for the traditional practice of using tropical medicinal plants to fight cancer, the research team stressed that people should not self-medicate without consulting qualified practitioners. According to Assoc Prof Koh, “More research is required to identify the active components responsible for the anticancer effects. Meanwhile, conservation of these medicinal plants is highly crucial so that there is a rich and sustainable source that could be tapped upon for the discovery of anticancer drugs.”

Besides studying the active components in the tropical medicinal plants, the NUS research team will also be evaluating their other pharmacological effects in order to understand the use of selected plants by patients and the public, and to further harness the benefits of medicinal plants for safe and efficacious use. Their research thus highlights the importance of conserving and understanding these indigenous plants as resources for drug discovery.