Bacteria on ISS no more dangerous than earthbound strains 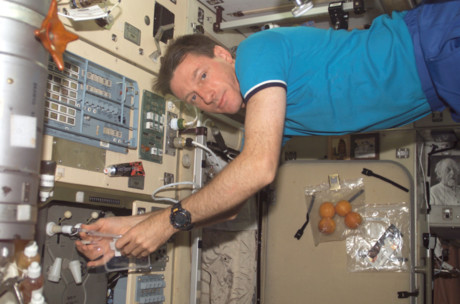 Two particularly tenacious species of bacteria have colonised the potable water dispenser (PWD) aboard the International Space Station (ISS), but a new study suggests that they are no more dangerous than closely related strains on Earth.

Shortly after NASA installed the water dispenser aboard the ISS in 2009, periodic sampling showed that two bacteria, Burkholderia cepacia and Burkholderia contaminans, were contaminating the drinking water. These microbes belong to a group of related Burkholderia species that cause opportunistic lung infections in people with underlying health conditions and are very difficult to kill using common sterilisation techniques. The bacteria have persisted in the water dispenser despite periodic flushing with an extra-strength iodine cleaning solution.

To learn more about these bacteria, Aubrie O’Rourke and colleagues at the J. Craig Venter Institute sequenced the genomes of 24 strains collected from 2010 to 2014. All of the B. cepacia and B. contaminans strains were highly similar, and likely descended from original populations of these two bacteria that were present in the water dispenser when it left Earth.

Writing in the journal PLOS ONE, the researchers concluded that the two bacterial species living within the dispenser are no more dangerous than similar strains that might be encountered on Earth. In the event of an infection, the bacteria can still be treated with common antibiotics.

“Within each species, the 19 B. cepacia and 5 B. contaminans recovered from the ISS PWD … were highly similar on a whole genome scale, suggesting each population (here meaning one for each species) may have stemmed from two distinct founding strains,” the study authors wrote.

“The differences that can be observed between the recovered isolates at the pangenomic level are primarily located within putative plasmids.

“Overall, we find that while the populations of Burkholderia present in the ISS PWD each maintain virulence, they are likely are not more virulent than those that might be encountered on planet and remain susceptible to clinically used antibiotics.”