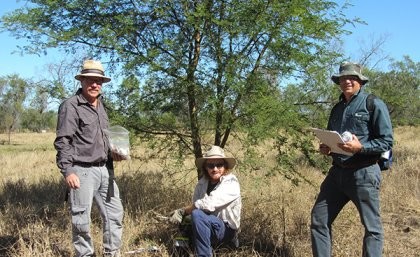 A natural weed control, developed back in 2010 to help manage one of Australia’s most invasive introduced weeds, has become the first woody weed bioherbicide to be granted federal regulatory approval.

The Di Bak Parkinsonia fungal bioherbicide was created at The University of Queensland (UQ) by plant pathologist Professor Victor Galea and Dr Naomi Diplock, in order to combat the invasive Parkinsonia plant. Prof Galea said he co-developed the bioherbicide using naturally occurring fungi that cause dieback.

“It was developed as a result of research conducted with Dr Diplock to explore the cause of dieback of Parkinsonia that occurs naturally in our landscape, with a view to harnessing it to create a natural management method,” he said.

“The result has been a new and effective biological agent that is safe to use, causes minimal harm to the environment and will result in sustainable and ethical control.

“This bioherbicide, which can be made into capsules and injected into trees, will change the way we manage woody weeds in our landscape.”

“Parkinsonia is one of Australia’s most invasive weeds, threatening rangelands, wetlands and natural waterways, as well as native plants and animal species,” Riikonen said.

“This weed is so problematic that in many parts of the country, the law requires landholders to contain Parkinsonia bush on their properties.

“Current attempts to control this introduced species involve invasive mechanical clearing of land or potentially harmful chemical sprays, which is why our fungal bioherbicide has so much potential.

“The agent can be injected into the trunk of the Parkinsonia tree and cause it to die without damaging the surrounding environment.”