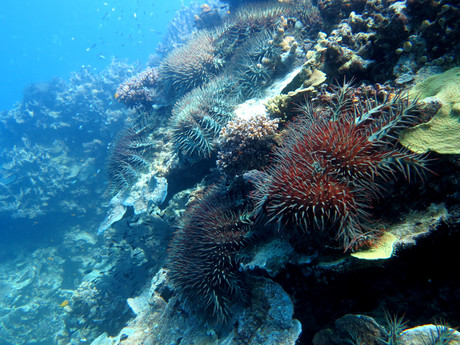 Researchers at the Australian Institute of Marine Science (AIMS) have made a significant breakthrough in the war against crown-of-thorns starfish, developing a cost-effective method for detecting the DNA of the coral-eating pest.

“It’s a genetic probe which we had developed to detect seastar larvae in plankton and we have been able to modify the method,” Dr Uthicke said.

“We have worked on this for the past three years, and we have been able to adapt this to make it more sensitive to detect adult crown-of-thorns seastar.”

Ecological monitoring has so far failed to detect early stages of an outbreak, preventing timely intervention. The current method for detecting outbreaks is on-reef field surveys using divers, said Dr Uthicke, but by the time these methods detect outbreaks, the outbreak is usually well established.

“Standard monitoring techniques only identify about 5% of the pest on reefs, but this new method will allow us to clearly identify whether greater numbers are present,” Dr Uthicke said.

“It counts the number of gene copies in the sample of seawater from a reef using a novel technique called digital droplet PCR.”

The fourth wave of outbreaks since the 1960s started around 2010 on Australia’s far northern Great Barrier Reef and has seen the significant loss of coral cover to the voracious appetite of the starfish, making it a major contributor to the coral reef crisis. This outbreak has spread as far south as Townsville along the Great Barrier Reefs, and is expected to continue south.

Image courtesy of AIMS/LTMP under CC BY 3.0 AU

Wild yeast, algae and the science of beer and wine