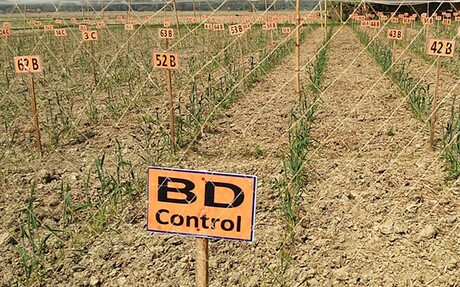 Researchers at the University of Gothenburg have developed several new varieties of wheat that tolerate soils with higher salt concentrations. After mutating a wheat variety from Bangladesh, they now have a wheat with seeds that weigh three times more and that germinate almost twice as often as the original variety.

The Bangladeshi wheat, which grows in fields near the coast, has a certain tolerance to salt in soils, which is important when more and more farmland around the world is being exposed to salt water. By mutating the wheat seeds from these coastal fields, Gothenburg researchers were able to develop approximately 2000 lines of wheat. The 35 lines that germinated the best at different field and lab experiments were planted in an automated greenhouse in Australia, where different saline concentrations were applied to the plants that were then weighed. They were photographed each day until the wheat had formed its ears.

“We developed wheat lines where the average weight of the seeds was three times higher and that germinated more often than the original wheat from Bangladesh,” said Gothenberg doctoral student Johanna Lethin, who published the team’s results as part of her thesis. Using DNA analyses and studies of other research, the team was also able to identify what genes control salt tolerance in the wheat plant.

“This is a milestone in our research,” Lethin said. “Now we have a couple of genes we know are involved in salt tolerance. The next step is to test if these genes are also in our best wheat varieties that we have mutated into existence.”

The potential in this discovery is global. Today, about 8% of the world’s arable land is no longer usable for crops because of salt contamination and more than half of the world’s countries are affected. Even in those parts of Asia where rice is currently the dominant crop, salt-tolerant wheat will become an important part of the future food supply since wheat farming requires much less water than rice.

“The next stage is to plant the salt-tolerant varieties in fields in Bangladesh,” Lethin said. “I would estimate that it will take about five years before we can have commercial production of salt-tolerant wheat, depending on how the field tests go.”

Analysis found microplastics were present in the vast majority of the waters sampled, even in...