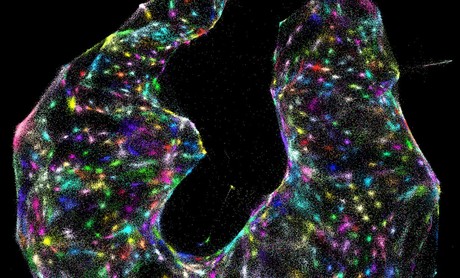 In an effort to image cells at the genomic level, US researchers have created an entirely new category of microscopy.

Traditionally, scientists have used light, X-rays and electrons to peer inside tissues and cells; these days they can trace thread-like fibres of nerves throughout the brain and even watch living mouse embryos conjure the beating cells of a rudimentary heart. Now researchers led by biophysicist Joshua Weinstein, from the Broad Institute of MIT and Harvard, have invented an unorthodox type of imaging dubbed ‘DNA microscopy’ that goes one step further — it can see what’s happening in cells at the genomic level.

Instead of relying on light (or any kind of optics at all), the team uses DNA ‘barcodes’ to help pinpoint molecules’ relative positions within a sample, helping scientists build a picture of cells and simultaneously amass enormous amounts of genomic information. Their work has been published in the journal Cell.

“It’s an entirely new category of microscopy,” said Howard Hughes Medical Institute (HHMI) investigator Aviv Regev, a co-author on the study. “It’s not just a new technique, it’s a way of doing things that we haven’t ever considered doing before.”

Until now, microscopy has fit into two main categories, the first of which is based on optics — electron microscopes, fluorescence microscopes and light-sheet microscopes are all based on the principle that samples emit photons or electrons, and the microscope detects the emission. The second category is based on dissecting samples at locations defined by a microscope, with computer programs then stitching together each dissected piece into a complete picture of the intact sample.

Optical imaging can offer intricate portraits of subcellular structure and action, while dissection-based microscopy can give scientists genetic information. Weinstein and his colleagues wanted to do it all in one shot — take a snapshot of a cell’s position and spell out the specific genetic sequences driving it — a combination that is important for scientists studying genetically diverse sets of cells.

The immune system is a perfect example, Weinstein said. Immune cell genes can vary down to a single letter of DNA. Each variation can trigger a dramatic shift in the type of antibodies a cell produces. Where that cell is located within a tissue can alter antibody production, too. If you focus on just one or the other, “you’re only getting part of the picture”, Weinstein said.

The good news, according to Regev, is that capturing a complete picture of a cell starts with a specimen and a pipette.

First, scientists take cells grown in the lab and fix them into position in a reaction chamber. Then, they add an assortment of DNA barcodes. These stick to RNA molecules, giving each a unique tag. Next, the team uses a chemical reaction to make more and more copies of each tagged molecule — a growing pile that expands out from each molecule’s original location.

“Picture every single molecule as a radio tower broadcasting its own signal outward,” Weinstein said.

A DNA-sequencing machine spells out the letters of every molecule within the sample, which takes up to 30 hours. An algorithm the team created then decodes the data — which, in the paper, represents roughly 50 million DNA letters of genetic sequences from each original specimen — and converts the raw data to images.

“You’re basically able to reconstruct exactly what you see under a light microscope,” Weinstein said. He added that the two methods are complementary — light microscopy can see molecules well even when they’re sparse within a sample, and DNA microscopy excels when molecules are dense, even piled up on top of one another. 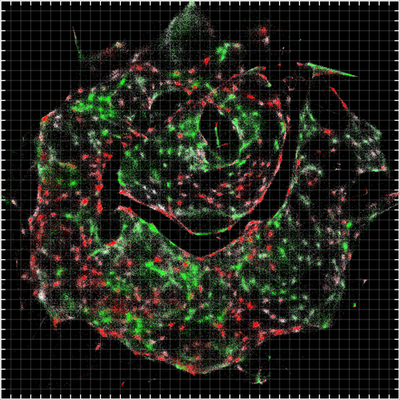 Regev added that the possibilities with this category of microscopy are wide open. He said, “We hope that it sparks the imagination — that people will be inspired with great ideas that we’ve never thought about.”

Top image caption: Using DNA microscopy, scientists can identify different cells (coloured dots) within a sample — with no prior knowledge of what the sample looks like. Image credit: J Weinstein et al/Cell 2019.