An international team of scientists has conducted research that opens up new possibilities for exploring what to date have only been theories of physics. Using the Hubble Space Telescope, astronomers have tested whether the strength of the electromagnetic force is altered in the strong gravitational field of a white dwarf star.

“The research opens up new possibilities for searching for exotic ‘scalar fields’, forms of energy that often appear in theories of physics that seek to combine the Standard Model of particle physics with Einstein’s general theory of relativity,” said Professor Barstow of the University of Leicester.

The electromagnetic force is one of four fundamental forces that shape the universe. Its strength is given in the Standard Model by a pure number, with no units, known as the ‘fine-structure constant’, denoted by the Greek letter alpha. Combining the speed of light, the electric charge of an electron, and Planck’s constant, alpha has always been measured on earth to have the same value, approximately 1/137.

A key question is whether alpha changes in different parts of the universe or in strong gravity fields. Recent observations of light from distant quasars (luminous sources thought to be caused by material heating up as it swirls around a black hole) hint that the fine-structure constant varies over the sky at large distances. But as yet there is no independent check for this result.

Some theories predict that alpha will vary in the presence of exotic scalar fields like those that are invoked to help unite the Standard Model with Einstein’s theory of general relativity that describes gravitation.

White dwarf stars, the compact remnants left behind when stars like the sun reach the end of their lives are an ideal natural laboratory to test this idea. With a lot of matter packed into a sphere about the size of the Earth, they have strong gravitational fields.

By measuring the value of alpha near a white dwarf, and comparing it with its value here and now in the laboratory, astronomers can indirectly probe whether these alpha-changing scalar fields actually exist. 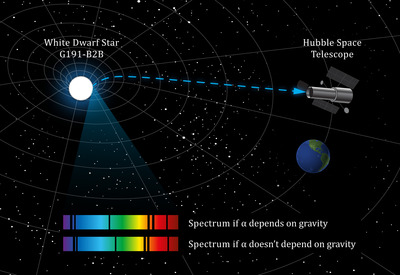 A diagram that shows how absorption line spectra will change if the electromagnetic force is affected by gravity. Credit: Dr Julian Berengut, University of New South Wales

The team measured alpha for the first time the white dwarf star G191-B2B using iron and nickel ions (atoms where electrons are added or removed to give them a net electrical charge) trapped in the atmosphere of the white dwarf. Despite the strong gravitational field of the white dwarf - nearly 100,000 times that on Earth - the ions stay above the surface because they are continually pushed up by the strong radiation from the star.

Professor Barstow adds: “We found that any difference between the value of alpha on Earth and that measured in the strong gravitational field of the white dwarf must be smaller than a part in ten thousand, which means that any scalar fields must only weakly affect the electromagnetic force.

“Unfortunately, our work was limited by the need to use very old laboratory measurements from the 1970s. In the future, with better laboratory data to complement the high-precision astronomical data, we should be able to measure the change in alpha down to one part per million. At that level we would be able to place strong restrictions on whether alpha is a true constant of nature.”