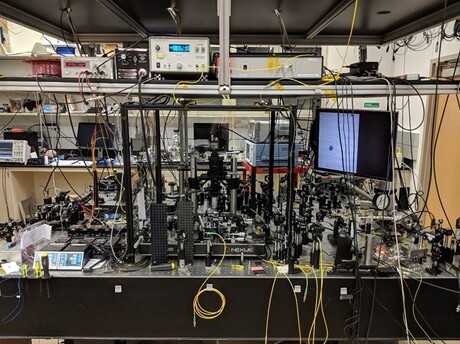 US researchers have developed an advanced spectrometer that can acquire data with exceptionally high speed, and could be useful for applications including remote sensing, real-time biological imaging and machine vision.

Spectrometers measure the colour of light absorbed or emitted from a substance. However, using such systems for complex and detailed measurement typically requires long data acquisition times.

Now, researchers from the US National Institute of Standards and Technology (NIST) have reported what is claimed to be the first dual-comb spectrometer with a pulse repetition rate of 10 GHz. They demonstrated their device by carrying out spectroscopy experiments on pressurised gases and semiconductor wafers, with the results published in the journal Optics Express.

“Frequency combs are already known to be useful for spectroscopy,” said lead author David R Carlson, also from the University of Colorado Boulder. “Our research is focused on building new, high-speed frequency combs that can make a spectrometer that operates hundreds of times faster than current technologies.”

“Our new system can measure a spectrum in mere microseconds,” added research team leader Scott B Papp. “This means it could be used for chemical studies in the dynamic environment of power plants or jet engines, for quality control of pharmaceuticals or semiconductors flying by on a production line, or for video imaging of biological samples.”

Dual-comb spectroscopy uses two optical sources, known as optical frequency combs, that emit a spectrum of colours — or frequencies — perfectly spaced like the teeth on a comb. Frequency combs are useful for spectroscopy because they provide access to a wide range of colours that can be used to distinguish various substances.

To create a dual-comb spectroscopy system with extremely fast acquisition and a wide range of colours, the researchers brought together techniques from several different disciplines, including nanofabrication, microwave electronics, spectroscopy and microscopy.

The frequency combs in the new system use an optical modulator driven by an electronic signal to carve a continuous laser beam into a sequence of very short pulses. These pulses of light pass through nanophotonic nonlinear waveguides on a microchip, which generates many colours of light simultaneously. This multicolour output, known as a supercontinuum, can then be used to make precise spectroscopy measurements of solids, liquids and gases.

The chip-based nanophotonic nonlinear waveguides were a key component in this new system. These channels confine light within structures that are a centimetre long but only nanometres wide. Their small size and low light losses, combined with the properties of the material they are made from, allow them to convert light from one wavelength to another very efficiently to create the supercontinuum.

“The frequency comb source itself is also unique compared to most other dual-comb systems because it is generated by carving a continuous laser beam into pulses with an electro-optic modulator,” Carlson said. “This means the reliability and tuneability of the laser can be exceptionally high across a wide range of operating conditions — an important feature when looking at future applications outside of a laboratory environment.” 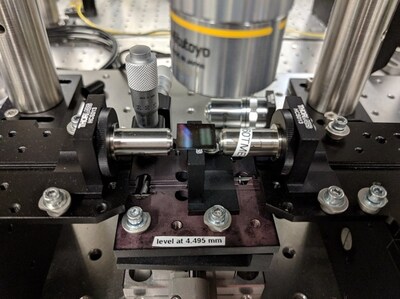 The nonlinear waveguide chip was a key component of the new system. Image credit: David R Carlson, National Institute of Standards and Technology and the University of Colorado Boulder.

To demonstrate the versatility of the new dual-comb spectrometer, the researchers used it to perform linear absorption spectroscopy on gases of different pressure. They also operated it in a slightly different configuration to perform nonlinear Raman spectroscopy on semiconductor materials. Nonlinear Raman spectroscopy, which uses pulses of light to characterise the vibrations of molecules in a sample, has not previously been performed using an electro-optic frequency comb.

The high data acquisition speeds that are possible with electro-optic combs operating at gigahertz pulse rates are ideal for making spectroscopy measurements of fast and non-repeatable events.

“It may be possible to analyse and capture the chemical signatures during an explosion or combustion event,” Carlson said. “Similarly, in biological imaging the ability to create images in real time of living tissues without requiring chemical labelling would be immensely valuable to biological researchers.”

The researchers are now working to improve the system’s performance to make it practical for applications like real-time biological imaging and to simplify and shrink the experimental set-up so that it could be operated outside of the lab.