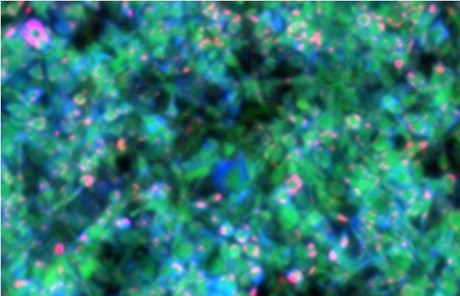 Label-free dynamic detection of biomolecules is a major challenge in live-cell microscopy — the simultaneous visualisation of dynamic alterations for classes of metabolites, such as carbohydrates and lipids, has until now been an unmet need in biomedical research. Now, a novel imaging method developed by German researchers is set to have a major impact on basic understanding, monitoring, prevention, diagnosis and treatment of metabolic diseases, such as diabetes and obesity.

Metabolic diseases such as diabetes and obesity are becoming ever more common globally, with both genetic disposition and lifestyle factors contributing to the prevalence of these diseases. Precise monitoring methods are thus needed in order to, for example, evaluate how a change in diet or exercise affects disease and its metabolic characteristics. A team from the Institute of Biological and Medical Imaging at Helmholtz Zentrum München and at the Chair of Biological Imaging at the Technische Universität München has now developed a technique that provides real-time images of biomolecules in living cells — without the need for labels or contrast agents. Their work has been published in the journal Nature Biotechnology.

With this new technology, called Mid-infraRed Optoacoustic Microscopy (MiROM), the researchers excite ‘fingerprint’-specific molecular vibrations with mid-infrared lasers. Selective absorption of transient mid-infrared light from different molecules triggers a thermoelastic expansion, ie, a minute volumetric expansion that generates ultrasound waves. These waves are detected and processed to form an image of the distribution of specific molecules, depending on the wavelength(s) of excitation.

Compared to previous techniques, one advantage of this method is that it is no longer limited to dry-fixed samples. By detecting acoustic waves, which pass easily through tissue rather than photons (which are strongly absorbed by tissues and water), MiROM provides imaging features from metabolites beyond existing technologies.

System development was led by Miguel Pleitez, also from the Institute of Biological and Medical Imaging and the Chair of Biological Imaging. He added, “MiROM provides novel insights into subpopulations of cells over time. Moreover, it enables us to detect not only lipids, but also carbohydrates and proteins in real time.”

Label-free imaging of metabolites can impact the ways we study molecular processes associated, for example, with fat storage and release due to the breakdown of white and brown fat cells, called lipolysis. However, a broader range of metabolic procedures and the interactions of different biomolecules can be studied as well. For example, metabolic processes change in association with diabetes, obesity or alterations of lifestyle conditions including diet and exercise, but observing many of these processes has until now required the use of labels and contrast agents that were laborious and could affect the biological function studied.

“MiROM offers unique in vivo label-free observations of metabolic processes in real time, which can be applied to dynamically study the effects of different diets on the cellular level or evaluate the performance of new classes of drugs,” Pleitez said.

Initial implementations of MiROM as a laboratory microscope have already demonstrated metabolic imaging in cells and excised tissues. The team is now working on a revised version of MiROM with enhanced speed, resolution and sensitivity to boost discoveries in a broader spectrum of diseases, including cancer.

“Our long-term vision is to adapt the technology to enable measurements in humans, so that we can study systemic processes associated with lifestyle changes and optimise disease prevention strategies,” Prof Ntziachristos explained.