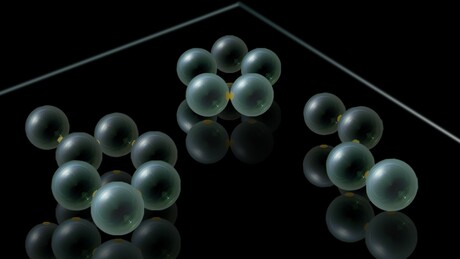 Molecules are so small that we cannot even see them with ordinary microscopes, which makes studying molecules or chemical reactions difficult: researchers are limited to either indirect observations or computer models. Scientists have now found a way to build micrometre-size model molecules using ‘patchy particles’, allowing for a much more direct study of molecular dynamics.

When we learn chemistry in high school, we use molecular modelling kits in which the atoms are represented by wooden or plastic balls that you can connect to form molecules. These modelling kits help us to visualise the spatial structure of molecules and imagine how they react, but obviously no real chemical reactions occur between the wooden or plastic balls. It now turns out that for very small balls, this situation changes dramatically.

While molecular modelling kits can be very useful, most of our actual knowledge about molecules arises in a much more indirect way. It comes, amongst others, from measurements of the spectrum of radiation that the molecules absorb. For instance, an infrared spectrum provides scientists with a fingerprint of the molecular vibrations from which they can deduce the molecular composition and structure. A direct view of molecules would allow immediate insight into their arrangement, molecular vibrations and reactions; however, such direct images are precluded by the molecules’ small size and fast motion. The fact that all observations of molecules are indirect challenges our imagination of the three-dimensional molecular structures and reactions.

This issue led physicists and chemists from the University of Amsterdam and New York University to find a way to combine the easy visualisation of common molecular modelling kits with the actual physics that goes on at the sub-nanometre scale of real molecules. In the laboratories in Amsterdam, the scientists managed to build ‘molecules’ from small micrometre-size plastic balls — so-called colloidal particles — that were produced in the New York labs. The particles were made in such a way that they attract each other in certain directions only, modelling very precisely the specific angles between chemical bonds between atoms, which determine the way in which the atoms arrange into molecules.

These micrometre-size particles indeed combine the best of both worlds: they are small enough to exhibit the characteristic motion and vibrations that molecules experience due to temperature, but are just large enough to be observed and followed using a regular microscope. They have been described in the journal Nature Communications.

Atoms in, molecules out

To imitate specific types of atoms, the Amsterdam researchers used techniques that were developed over the past few years to equip the colloidal particles with attractive patches where the model atoms could ‘click’ together. The number and configuration of these patches determines the type of atom that is modelled — for example, to imitate carbon atoms, the researchers made particles with four patches in a tetrahedron geometry, or particles with two patches on opposite sides, reproducing the bond angles of two well-known binding states of carbon atoms. On top of that, they managed to fine-tune the interactions between the patches so that the model atoms were able to form bonds and split up again in the exact same way that atoms do in real chemical reactions.

The modelling kit was a clear success. When several model atoms were brought together, the researchers observed that the particles indeed formed the ‘molecules’ that are well known from carbon chemistry. Under a microscope, analogues of molecules such as butyne and butane were visible — molecules that have their main atoms arranged along a line. Molecules with ring-like configurations, which play an important role in organic chemistry, could also be modelled: structures such as cyclopentane (a molecule with a ring of five carbon atoms) and cyclohexane (with a ring of six such atoms) could be observed.

Due to the larger size of the model molecules, the researchers could follow their formation and internal motion in real time and in great detail. This allowed them to directly see phenomena that were only known to occur from indirect observations. For example, for the five-atom ring structure of cyclopentane, they directly observed the characteristic ‘puckering’ motion of the constituent atoms: the cyclopentane ring is not fixed in a single plane, but it deforms so that constituent atoms move in and out of that plane. The reason for this behaviour is that the natural angles between the atoms do not exactly match the angles that are needed to make a flat five-atom ring, and as a result one atom always has to be puckered out of the plane. So far, the resulting puckering motion had only been observed by indirect spectroscopic measurements, but now the researchers were able to see it happen before their very eyes, following the motion directly in real space and time. They found that the flips occurred collectively: the up and down motion of a particle influenced that of all other particles in the ring.

Using the same molecule, the researchers could then observe how chemical reactions took place. The ring was observed to open up and attach to other molecules — an effect which could be strengthened by adding an attractive surface to the set-up. That is, the surface acted as a catalyst, providing insight into what happens during such catalytic reactions.

While the micrometre size of the model atoms is still a factor of 1000 or so larger than the sub-nanometre size of actual atoms, they are small enough to undergo random thermal motion, and this is what makes chemical reactions happen. As Richard Feynman famously put it in his lectures, “Everything that living things do can be understood in terms of the jigglings and wigglings of atoms” — and it is precisely these jigglings and wigglings, clearly observable when looking at the colloidal atoms with a microscope, that distinguish the micrometre-size molecular modelling kit from its counterpart that we know from high school.

The modelling kit is thus a very useful tool to directly observe ‘molecules’ in their natural habitat and should have many useful applications. Besides giving an attractive visualisation of molecules, the results provide insight into the action of geometric catalysts on molecular reactions. Furthermore, the availability of the new small building blocks opens the door to the design of complex new materials, directly under the microscope, with a host of applications ranging from artificial tissue for medical purposes to functional nanostructures that can be used in technology.

Image caption: An artist’s impression of some molecules that can be made and studied using the new modelling kit. Image credit: Laura Quarto