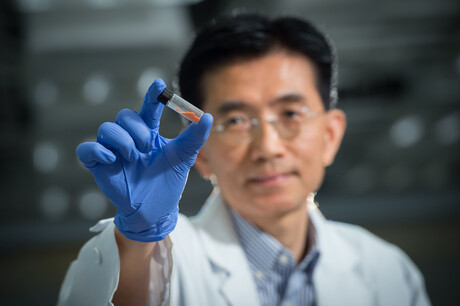 Scientists from Hong Kong Baptist University (HKBU) have invented a novel contrast agent for magnetic resonance imaging (MRI) that enables real-time visualisation and detection of the size and amount of amyloid beta in the brain — a main hallmark of Alzheimer’s disease (AD).

The invention offers hope for early detection and large-scale routine screening of AD, and can also help to assess the efficacy of drugs used to treat it. It has been described in the journal Advanced Functional Materials.

AD is a chronic neurodegenerative disease that constitutes 60–70% of dementia cases. It is characterised by the abnormal accumulation of amyloid beta (Aβ) in the brain. Real-time visualisation of Aβ contents in the brain is crucial for the diagnosis of AD and the monitoring of the disease’s progression.

A positron emission tomography (PET) scan is currently the clinical method used to visualise Aβ, but this method is expensive, invasive and radioactive, with limited image resolution. MRI is a more widely used clinical imaging tool, which requires a contrast agent to enhance the visibility of targeted objects in a specific location. However, at present there is no clinically approved MRI contrast agent available for the real-time imaging of Aβ in human brains.

HKBU researchers, led by Professor Ricky Wong Man-shing and Professor Li Hung-wing, have now created a novel nanomaterial for Aβ imaging. It loads and coats gadolinium-based nanoparticles, a chemical substance commonly used as an MRI contrast agent, with a specially designed silica layer that can accommodate a proprietary, non-cytotoxic fluorescent cyanine dye. The cyanine dye is an organic compound used to visualise and quantify Aβ proteins.

The dye-adsorbed silica coating layer turns the gadolinium-based nanoparticles into a biocompatible, bio-stable and non-toxic agent that is permeable to cell membrane, can penetrate blood–brain barriers and is neuroprotective for practical biomedical applications. Most importantly, in model experiments with mice, the modified nanoparticles can bind with Aβ contents and enhance magnetic resonance signals (ie, electromagnetic waves) and differentiate Aβ contents in the brain in terms of size and number when MRI is applied.

“By modifying the surface functionalised layer of the gadolinium-based nanoparticles, we have developed a versatile and sensitive MRI contrast agent for the diagnosis of Alzheimer’s disease, which was proved effective in the mouse model,” Prof Wong said.

HKBU researchers injected the modified nanoparticles into both transgenic mice with over-expressed Aβ and mice of the control group. MRI of their brains showed that the magnetic signals were stronger and longer in the transgenic mice, which proved that the modified nanoparticles had passed through blood-brain barriers to bind with Aβ contents in the brain.

Clinical observation showed that the size and number of Aβ spots in human brains increase with the age of AD patients. In line with this, the research team observed that the brightness of the brain sections of transgenic mice increased with their age, and their magnetic resonance signal intensity was generally higher than that in the mice of the control group. More bright spots were also found in older transgenic mice whereas almost no bright spots could be seen in the mice of the control group. All these results demonstrated the sensitivity and effectiveness of the modified nanoparticles in Aβ targeting and imaging.

“The research findings show that our invention demonstrates great potential for the early detection and routine screening of Alzheimer’s disease,” Prof Li said. “It can also help monitor disease progression and assess the efficacy of potential drugs.”

With the invention and clinical application of an effective MRI contrast agent for AD, large-scale routine screening for the disease will become possible, enabling early diagnosis and treatment that can achieve better clinical care for patients and reduce public healthcare burdens. Furthermore, experiments conducted by the research team also found that the modified nanoparticles have inhibited the Aβ aggregation process and the neurotoxicity of Aβ effectively. Their high therapeutic potential for will be investigated by the research team in future.