The production of plastics and fuels often relies on agostic interactions - three-centre two-electron bonds between a transition metal, carbon and hydrogen. While studying these bonds recently, chemists made two differently coloured crystals - one orange, the other blue - from one chemical in the same flask. The discovery, reported in Angewandte Chemie International Edition, is providing new insights into important industrial chemical reactions.

“We were studying agostic bonds in a project to make liquid fuels like methanol from carbon dioxide to replace fuels we get from oil,” said chemist Morris Bullock at the US Department of Energy’s Pacific Northwest National Laboratory. “We knew the molecule we were making would have an agostic bond but we had no idea there’d be two flavours of these metal complexes.” 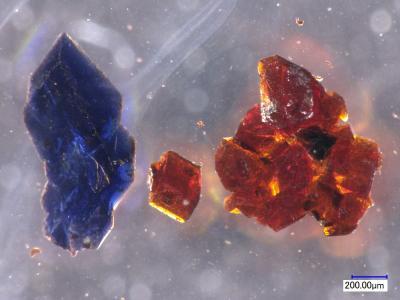 While chemists have studied these bonds in chemicals in liquid form, no one had crystallised one chemical with multiple forms of its agostic bonds. And no one expected different forms to give rise to different colours.

Bonds come in many varieties in molecules. They string atoms together, sometimes forming a trunk and branches of atoms like a tree. But the trunk and branches of chemicals often fold up into a more compact shape, requiring additional weaker bonds to hold the shape in place. An agostic bond is one of these additional bonds, a shape-holder. They occur between a metal and a distant carbon-hydrogen bond along some chain, folding the chain back to the metal and pinning it there.

First discovered in the 1980s, agostic bonds frequently occur in catalysts because catalysts usually contain metals. This work will help researchers get a better handle on some catalytic reactions found in common industrial processes such as making plastic or fuels.

Heart of the matter

The metal in a catalyst is usually the reactive heart of the molecule. Bullock and postdoctoral chemist Edwin van der Eide knew an agostic bond in their catalyst would help protect the reactive metal from working at the wrong time: The carbon-hydrogen bond blocks the reactive metal until conditions were right, which in turn would help the scientists better control the catalytic reactions. So van der Eide set about producing and crystallising catalysts that contain a metal atom - in this case, molybdenum.

In the lab, van der Eide’s flask of chemicals held a molybdenum-containing molecule that turned the solution violet. He added another liquid to coax the molybdenum complex to crystallise, just as salt crystallises from seawater to form flakes at the seashore. Some crystals formed at the bottom of the flask and others formed near the top of the violet solution.

Orange crystals formed at the bottom of the flask and blue above. If van der Eide dissolved either the orange or blue crystals in a fresh flask of the original solvent, the violet colour returned, with the same properties as the original violet solution. These results suggested that either molecule in the two coloured solids could give rise to both structures in liquid, where they easily change back and forth.

The researchers examined the differently coloured crystals to determine their structures. The molecule forms a shape like a piano stool: a ringed section forms a stool seat on top of the molybdenum atom, with multiple legs connecting to the molybdenum at the bottom.

PNNL’s Ping Yang at EMSL, DOE’s Environmental Molecular Sciences Laboratory on the PNNL campus, took to EMSL’s supercomputer Chinook to perform theoretical calculations on the orange and blue structures. Chemically, the two structures were almost equally likely to form, with the blue one having a slight edge. The analysis also revealed why the crystals were different colours, which is due to subtleties within the structures.