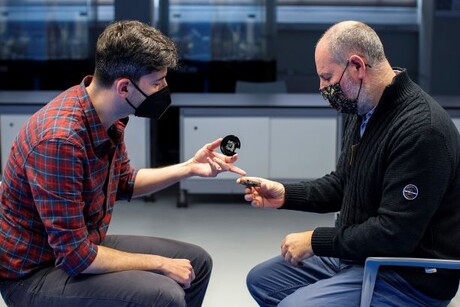 As part of the EU-funded ChipScope project, an international team of researchers has created a new type of super-resolution optical chip-sized microscope — described as the smallest and cheapest high-resolution microscope to date.

The four-year project has receiving funding of €3.75 million as part of the Future and Emerging Technologies (FET) program. Project participants include the University of Barcelona (UB), the Technical University of Braunschweig, Tor Vergata University of Rome, Expert Ymaging, the Austrian Institute of Technology, the Medical University of Vienna and the Swiss Foundation for Research in Microtechnology.

Unlike traditional microscopy, in ChipScope’s method the resolution depends on the size of the lightening source instead of the detection system. That is, instead of a single source of light — such as in conventional microscopes — it used millions of light sources in miniature.

“ChipScope essentially consists of a control chip and another chip which measures the intensity, in other words an optical photo detector,” said UB Professor Ángel Diéguez, coordinator of the project. “And what makes this microscope unique is its LED array.”

To build the microscope, researchers developed 200 nm nanoLEDs that act as a lightening source and determine the resolution of the microscope without lenses. This should allow the observation of some viruses and cellular processes in real time without the problems of current high-resolution techniques.

“After several decades of research, the Technical University of Braunschweig has succeeded in developing a method for making the LED array with the world’s smallest LEDs. We can switch on one after the other independently,” UB Professor Daniel Prades said. “This is something that has never been achieved before, and enables us to scan the array and give shape to the ChipScope images.”

“The sequential and independent activation enables us to determine the position of the observed object and to follow it real time,” Prof Diéguez added. 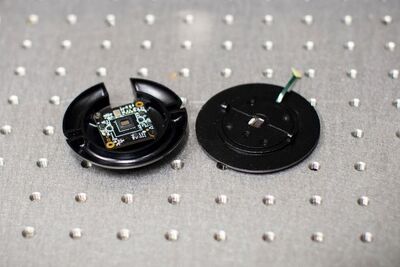 The project proved that the microscopy method works and offers a resolution that depends on the size of the used LEDs. It has been successfully tested with different samples, including cellular images of idiopathic pulmonary fibrosis (IPF) — a chronic lung pathology related to age which causes half a million deaths per year.

“There are three important points which must be considered for the microscopy of living cells,” said Stefan Schrittwieser, a research scientist at the Austrian Institute of Technology. “First, we have to transport the cells to the active point on the microchip. Second, we have to supply the cells with nutrients. Third, we have to guarantee a stable temperature of 37°C. All this can be miniaturised to the level of a pocket microscope.”

The current prototype has been developed at a cost of nearly €1500 but could cost as few as tens of euros when produced at a large scale, since it is completely based on conventional microelectronic technologies. Combined with its small size, this makes it advantageous for remote and disadvantaged regions.

“Consider that there are a lot of remote regions in the world,” said Sylvia Geleff, a pathologist at the Medical University of Vienna. “Additionally, many regions suffer from economic disadvantages. A handy and inexpensive instrument would be a huge benefit for these regions. Above all, the instrument can be applied for medical diagnostics.”

As a continuation of ChipScope, the UB team is leading a new project, titled SMILE. The coordinator of the project, Prof Prades, explained that its aim is to “develop technology-based micro-lightening tools created in ChipScope”.

“This is a step forward to bring this new technology to a broader market,” he added.

The objective is to develop an array of microLEDs (about 10 µm) to bring a higher lightening intensity and which can be added to standard optoelectronic instrumentation systems. This will achieve a scalable lighting platform in terms of number of pixels, intensity and speed, which is more flexible than current solutions. In addition, when combined with colour conversion systems, the tool will be able to operate at different wavelengths and will be applicable beyond microscopy, such as in controls of chemical and biological reactions.

To adapt the development to the needs of the market, SMILE counts on the participation of a group of final users formed by multinationals, small companies and research centres from different branches that will be responsible for the final experimental tests in the fields of the manufacture of DNA chips, photolithography, optogenetics, high-performance fluorimetry and holographic microscopy.

The project has received a funding of nearly €2 million in two years from the European FET-Proactive program, which is awarded to promising technologies. This has enabled the creation of the Braunschweig-based start-up company known as QubeDot, whose mission is to market the technology of nanoLED arrays.

Top image caption: Dani Prades and Ángel Diéguez are the UB researchers who led the project.