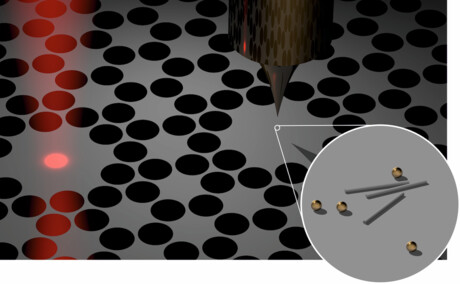 European researchers have developed a new approach that inverts the standard paradigm of scanning force microscopy, raising the prospect of force sensing at the fundamental limit. Their concept has been published in the journal Physical Review Applied.

The development of scanning probe microscopes in the early 1980s brought a breakthrough in imaging, throwing open a window into the world at the nanoscale. The idea is to scan an extremely sharp tip over a substrate and to record at each location the strength of the interaction between tip and surface. In scanning force microscopy, this interaction is — as the name implies — the force between tip and structures on the surface. This force is typically determined by measuring how the dynamics of a vibrating tip changes as it scans over objects deposited on a substrate. A common analogy is tapping a finger across a table and sensing objects placed on the surface.

Now a team led by Alexander Eichler, a senior scientist in the group of Professor Christian Degen at ETH Zurich, has turned this paradigm upside down, reporting the first scanning force microscope in which the tip is at rest while the substrate with the samples on it vibrates. And while doing force microscopy by ‘vibrating the table under the finger’ may look like making the entire procedure a whole lot more complicated, mastering the complexity of this inverted approach comes with great payoff. Indeed, the method promises to push the sensitivity of force microscopy to its fundamental limit, beyond what can be expected from further improvements of the conventional ‘finger tapping’ approach.

The key to the superior sensitivity is the choice of substrate. The ‘table’ in the experiments of Eichler and colleagues is a perforated membrane made of silicon nitride, a mere 41 nm in thickness. Collaborators at the University of Copenhagen, led by Albert Schliesser, have established these low-mass membranes as outstanding nanomechanical resonators with extreme ‘quality factors’. Specifically, once the membrane is tipped on, it vibrates millions of times or more before coming to rest. Given these exquisite mechanical properties, it becomes advantageous to vibrate the ‘table’ rather than the ‘finger’, at least in principle.

Translating this theoretical promise into experimental capability is the objective of an ongoing project between the groups of Prof Degen and Schliesser, with theory support from Dr Ramasubramanian Chitra and Professor Oded Zilberberg at ETH Zurich. As a milestone on that journey, the experimental teams have now demonstrated that the concept of membrane-based scanning force microscopy works in a real device. 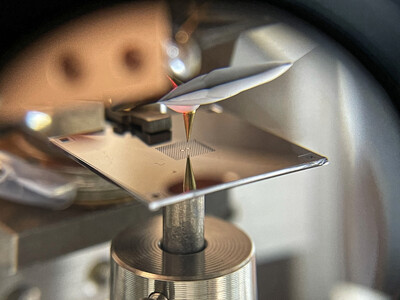 Photograph of the experimental set-up. The separation of the islands is around half a millimetre. Image credit: David Hälg and Shobhna Misra, ETH Zurich.

In particular, they showed that neither loading the membrane with samples nor bringing the tip to within a distance of a few nanometres compromises the exceptional mechanical properties of the membrane. However, once the tip approaches the sample even closer, the frequency or amplitude of the membrane changes. To be able to measure these changes, the membrane features not only an island where tip and sample interact, but also a second one — mechanically coupled to the first — from where a laser beam can be partially reflected, to provide a sensitive optical interferometer.

Putting this set-up to work, the team successfully resolved gold nanoparticles and tobacco mosaic viruses. These images serve as a proof of principle for the novel microscopy concept, but they do not yet push the capabilities into new territory. The researchers plan to combine their novel approach with a technique known as magnetic resonance force microscopy (MRFM) to enable magnetic resonance imaging (MRI) with a resolution of single atoms, thus providing unique insight into viruses, for example.

Atomic-scale MRI would be another breakthrough in imaging, combining ultimate spatial resolution with highly specific physical and chemical information about the atoms imaged. For the realisation of that vision, a sensitivity close to the fundamental limit given by quantum mechanics is needed. The team is confident that they can realise such a ‘quantum-limited’ force sensor, through further advances in both membrane engineering and measurement methodology. With the demonstration that membrane-based scanning force microscopy is possible, the ambitious goal has now come one step closer.

US scientists report the use of ion mobility–mass spectrometry to help regulatory agencies...