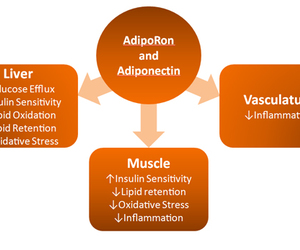 Adiponectin controls many metabolic processes and is known to contribute to metabolic pathologies, including diabetes, atherosclerosis and obesity. AdipoRon is a novel small molecule that mimics adiponectin.

It controls many metabolic processes and is known to contribute to metabolic pathologies including diabetes, atherosclerosis and obesity. It has been shown to increase insulin sensitivity and decrease plasma glucose by increasing tissue fat oxidation. Adiponectin receptor activation is a promising potential therapy for diabetes and other obesity-associated diseases.

AdipoRon is a small-molecule adiponectin mimetic. At low micromolar concentrations, it binds to the adiponectin receptors AdipoR1 and AdipoR2. It is orally administered and readily absorbed and delivered to target tissues, making it potentially clinically relevant. The product has been shown to induce insulin sensitivity, inhibit lipid synthesis and increase glucose metabolism.

Next-day results are available with CompactDry TCR for total viable counts — an... 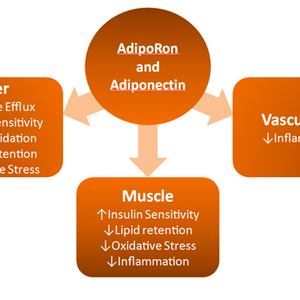