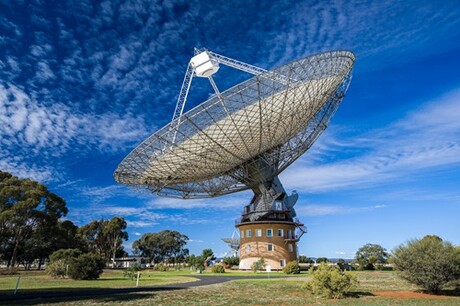 CSIRO’s Parkes telescope, also known as ‘The Dish’ and ‘Murriyang’, is valuable for spacecraft tracking due to its large surface and advanced data acquisition systems, which are used primarily for astronomy research. The 64 m telescope will be the largest and most sensitive receiving ground station for Intuitive Machines’ upcoming missions, maximising the return of the scientific and engineering data for the lunar exploration program.

CSIRO’s Acting Chief Scientist, Dr Sarah Pearce, said the organisation is proud to have its world-class scientific facilities be part of the global team that will help Intuitive Machines and NASA deliver science instruments to the Moon.

“Along with NASA’s Honeysuckle Creek station near Canberra, the Parkes radio telescope helped share the Apollo 11 Moon landing with more than 600 million people around the world,” she said. “And now we are proud to support the first companies extending their reach to the Moon’s surface, advancing knowledge that can benefit life both on Earth and, one day, on the Moon.

“Australia is growing a vibrant and respected space industry, underpinned by world-class national infrastructure and a long history in enabling space exploration. This is another example of Australian capability supporting the international space community.”

Intuitive Machines will launch its Nova-C Moon lander on a SpaceX Falcon 9 rocket towards the end of 2021, delivering commercial cargo and five NASA experiments to investigate the local geography and test technology required for future human exploration.

CLPS initiative companies are responsible for all aspects of delivering their cargo to the Moon, including spacecraft tracking and communication. NASA urged CLPS providers to utilise ground station capabilities outside of NASA’s Deep Space Network, the ground station network supporting the Agency’s many interplanetary space missions.

Intuitive Machines Vice President for Control Centers Dr Troy LeBlanc said being the first commercial company to land on the Moon is a huge communications challenge.

“We require the technical support and expertise of the team at CSIRO’s Parkes radio telescope to provide mission tracking and data downlink services,” Dr LeBlanc said.

“The successful use of the Network for these initial missions will underpin the return of humans to the Moon and ultimately sustainable presence under the Artemis program.”

“Our Parkes radio telescope began supporting space missions in 1962, when it tracked the first interplanetary space mission, Mariner 2, as it flew by the planet Venus,” Dr Bock said.

“Most recently, the telescope received data from Voyager 2 as it entered interstellar space, supporting the Canberra Deep Space Communication Complex — which we also manage for NASA.

“Operating as a ground station for space missions complements the astronomy research conducted with the telescope and helps to maintain its capabilities as a world-class research instrument.”